Today I was very organised.  For me.

I got up early to switch on my laptop and check that the Powerpoint presentation I had carefully prepared last week looked as good as when I switched off on Friday, in readiness for a two-hour talk to professionals and foster carers about drug use and young people.  To my utter horror, I couldn’t open it.  I had saved it to the wrong drive and the only way I could access it was if I docked the laptop in at work.  No time to go into the office as I had to be in another part of the county in 45 minutes time!!

Fortunately, I had printed off a copy of the slides with the idea that I would jot down some notes over the weekend.  That didn’t happen, obviously, but I did at least have the text I had carefully prepared before me, so I hurriedly typed out another set of slides, jumped into the car and arrived with seconds to spare.  The new Powerpoint presentation lacked the pretty patterns and font that the original had sported but it saw me through the two-hour talk I had to give. Nobody was any the wiser and I managed to appear knowledgeable, professional and confident to all those present.

I thought I had stopped doing that.  Leaving it to the last minute, I mean.  I have got much better in recent years at preparing myself for things.  (I think that comes from living with Mr OCD actually!!) but it has certainly taught me that life is so much easier if you plan ahead.

On the other hand, I actually think I perform better when I leave it all to the last minute.  I get an adrenalin rush from the panic that, I believe, fuels my creativity.  I could be called (and indeed have been called) a procrastinator. I leave things and leave things, choosing to do anything and everything rather than the task at hand until there really isn’t any other option but to do it.  But is this procrastination?  Or is it simply ‘doing other things’?  I prefer to think of it as the latter.  I still manage to pull it out of the bag and it must work for me as I have successfully completed a degree and a masters using this technique….

A tutor on a management course I attended told us there are two types of people – ‘steppers’ and ‘squigglers’.  The steppers follow a set pattern to achieve a deadline, whereas the ‘squigglers’ appear to be all over the place in the process of getting there.  Both arrive in the end.  The steppers find it harder to deal with a setback in their well laid plans whereas the squigglers never had a plan in the first place so can carry on regardless.  That’s not to say it’s plain sailing for the squigglers.  Leaving things to the last minute leaves no room for error.  But that’s quite exciting, really.  Isn’t it? 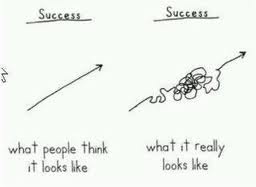 One thought on “Winging it…..”